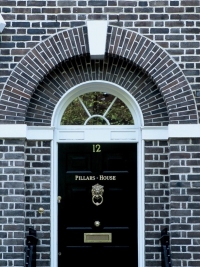 Brick Cutters specialise in the design and manufacture of traditional brick arches. Your brick arch can be cut from genuine fully-washed rubbing blocks, material collected from your site, or from stock materials at a merchant or reclaim dealer.

We are happy to offer advice on the most appropriate materials for your project. Samples are often issued for approval before manufacture.

The software used to draw and set out your brick arch has been designed and compiled in house. It has been developed to replicate traditional methods for each of the basic styles of arch.

Joint widths can be reduced to 1mm for the finest rubbed and gauged work. Pointing in lime putty is available for those brick arches that are rubbed, gauged and fabricated into a steel lintel.

Your brick arches will be designed and manufactured to capture the traditional geometry and the hand crafted style of the Master Bricklayers and craftsmen of the past.

If you wish to copy a style or pattern from an existing arch you can send us an accurate dimensioned sketch or better still a square on high resolution digital photo, (with the dimensions included). Once the information is agreed, a new arch can be designed to the exact proportions of the old. A sketch is provided for your signed approval before manufacture proceeds.

You may want to browse our section on arch styles which outlines the important dimensions and details on each of the basic arch shapes.

After a  decade-long transformation the Midland Grand hotel, the Victorian palace attached to St Pancras station, was returned it to its original luxury in 2011.

The 1852 Grade 1 listed station has been completely refurbished and massively expanded whilst the station remained open for business. Brick Cutters designed & supplied large span brick arch lintels with hidden structural support that could be man handled into position without crane access.