Our SAFESECURE® brick cladding system (patent pending) ensures the secure retention of facing bricks allowing horizontal and vertical use in curtain walling and at height in public areas.

The addition of a 'top hat' stainless steel section interlocks with the slotted bricks to provide the ultimate security in the event that the conventional high strength epoxy mortar should fail during the 60 year design life.

Our SAFESECURE® brick cladding system can be used horizontally or vertically in environments which were previously difficult to design safely or cost effectively in brick. This ensures the secure retention of facing bricks allowing vertical, horizontal, and inverted (soffit detail) panelling at heights of more than 18m.

The benefits of the SAFESECURE® system include: 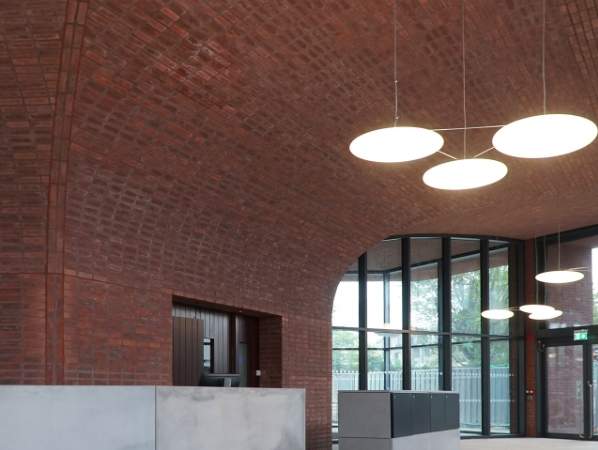 Click here for a discussion on the invention and design of the SafeSecure® brick soffit solution which was used as cladding for the Hoxton Towers development in Hackney, East London. Project Director Jim Watts from Wates Construction Ltd, the lead contractor on this project, explains the process they went through from design to installation.

This project comprises 3 & 4 bedroom dwellings with the road side elevation retaining the old museum façade. Its distinctly Roman influenced appearance included decorative arches and has become synonymous with the city of St Albans. Any development to the site had to be in keeping with this style whilst bringing a contemporary feel to the area.

The redevelopment of a corner site at Old Street / Silicon Roundabout included a tower and low-rise buildings.

The end elevations carried large steel ventilation ducts which were to be clad in brickwork to replicate the appearance of the wet laid facades. To ensure safety and retention of the cladding over the building design life, the ducts were clad in the SafeSecure® system using slips cut from the same brick type.

This refurbishment and extension of a Victorian warehouse used high quality, crafted materials to complement the existing Victorian building.Two elevations of a two-storey extension to the warehouse featured Victorian style tiles under each window.

The designers were challenged to find a method for mechanically fixing these tiled panels which the SafeSecure® system achieved.

The two landmark Towers nestle between Shoreditch Park and the Regents Canal in Hackney, east London. Bulmer Brick Cutting Services are responsible for twelve of the fifteen brick related products being supplied and installed at these striking new tower blocks, as well as several ancillary items and fittings.