Also known as the Roman arch, the Semicircular Arch forms a half circle and is a major feature of all Roman architecture. A strong structure, this arch is often found in bridges and aqueducts. It appears a simple arch to manufacture, as each voussoir is identical in taper to its neighbour. However, there are several key points to consider before ordering.

Adequate clearance is required between the striking points (or span) of the arch to allow a frame to fixed, 3mm all round will normally suffice. Joint width is also a key consideration in the design of a semicircular arch as this affects the lintel position on the jamb. 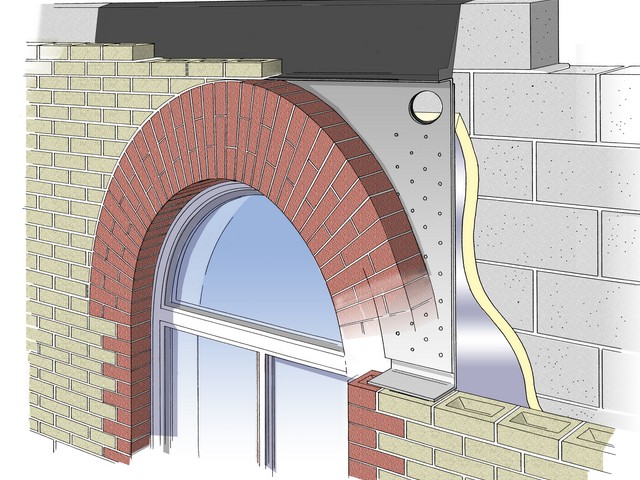 With cavity work, careful thought should be given to the support for the inner leaf of masonry or structural frame, which is often load bearing. Does the inner structure require support as a semicircle? This is a frequent oversight and can be easily resolved at the initial enquiry.

The semicircular arch may feature a profiled hood around the extrados called the Label Course, which often projects from the face brickwork. This feature is a weathering over an opening and can sometimes have a lead work dressing over.

The graphic shows an example of a Bulmer fabricated structural arch. The animated video demonstrates the simple construction process.

To specify a segmental arch you will need the following information. When measuring period property it is useful to measure the work, using the system in which it was built. Typically, before 1970 in the UK work was built using Imperial dimensions E.g. 4 courses per foot or in metric, 4 course per 305mm:

We will also need to know whether the arch will have any special features such as a keystone or carved soffit. If you are not sure call us on 01787 269132 for advice or email your enquiry to info@brickcutters.com